The communion host maker is of similar age. Note the simple, bare cross. As I explain in the Appendix article, we had two of these host makers, which were nearly identical except that the other one has a more elaborate cross with the dead body of Jesus upon it. The Catholic Church ended up with that one while this one remains in my possession.

This is the farmer's market where I have sold my sprouted wheat bread; the site of an amazing synchronicity that I relate in the Appendix article, which capped a series of synchronicities that spanned a decade and a half...... 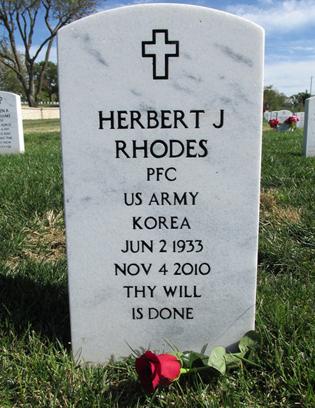 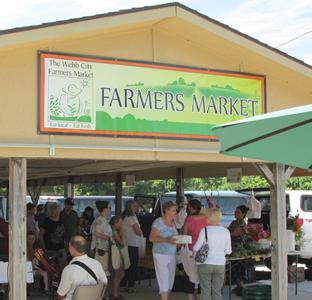 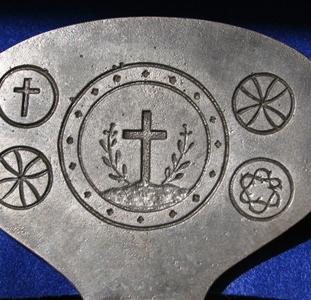 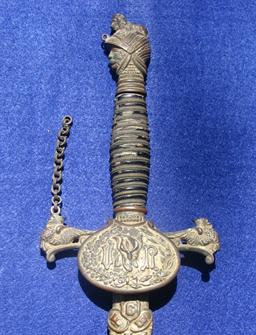 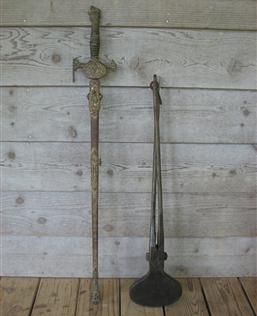 The top two illustrations are associated with the book's main text. The first is the Ouroboros pictured in the Chrysopoeia of Cleopatra, a second century AD alchemical text. It encircles the Greek words that translate "The All is One." And on this quest we learn precisely why the Chrysopoeia of Cleopatra associates the Ouroboros with the Philosopher's Stone.

The second Ouroboros is a modern stylized version, which better conveys the "no beginning and no ending" aspect of this symbol's meaning.

For more images associated with the main text, visit the Links page. 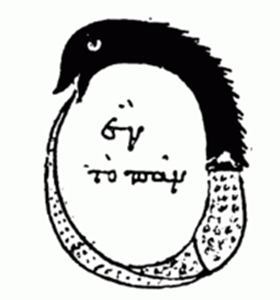 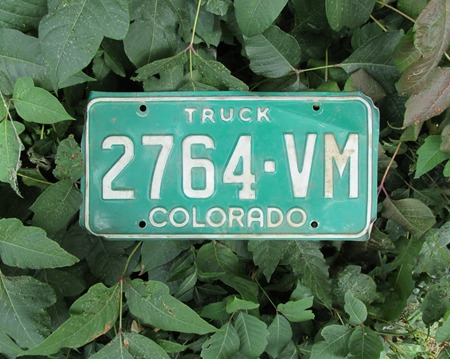 Karl Dittmann; a nicer guy you will never meet. And his mention of A Course in Miracles helped lead me to the Holy Grail.

The Appendix article says all that need be said about the synchronicities involved with this NASA logo. And if you've read that article you know why I point out this fact: The One Who is in control of absolutely all synchronicities  is surely not the one who is symbolized so well by the following picture of  a land-locked submarine; an "earth-bound..."

(If you've read the book you are able to finish this sentence.) 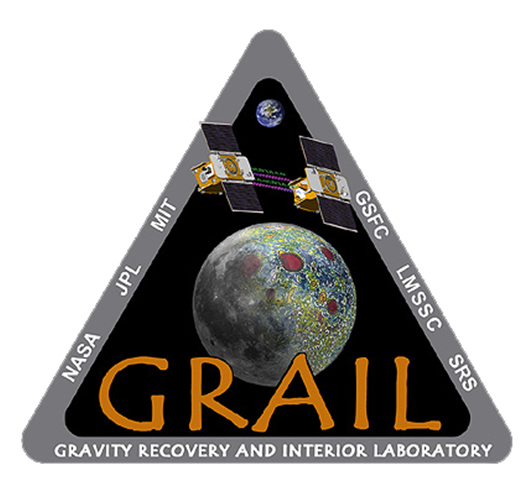 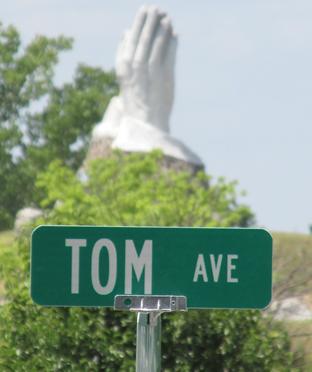 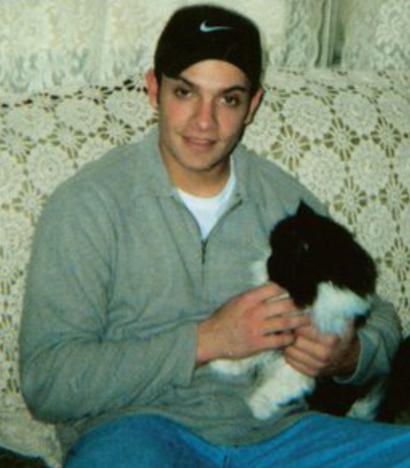 It once plied the open seas, the United States nuclear submarine USS Hawkbill SSN666, nicknamed "Devilfish" by its crew.  Its "conning tower" or "sail" (seen here) resides in Arco, Idaho, which was the site of the first United States nuclear power plant. That plant had an accident; a partial meltdown, which was kept secret so as not to undermine popular opinion for nuclear power. On this quest we learn that there is meaning in absolutely everything. 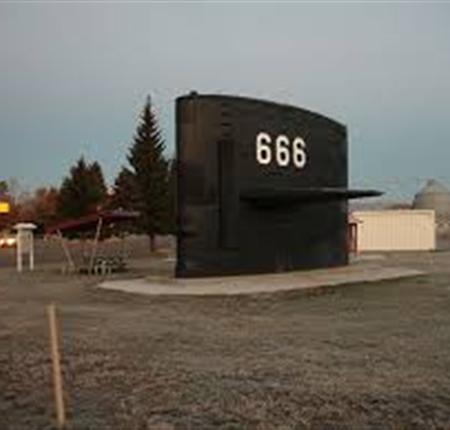 ....a string of synchronicities that got even longer when the missing street sign appeared at the market several years later. (I would say that we probably know the sign thief's first name.) And the background is frosting on the cake! This view is looking west from the alley behind the market. Tom Avenue runs in front of the market.

My dad was a very kind and humble man. (He had to be in order for me to be able to live out my fate!) Born in '33, he left this world the eleventh month of 2010 at the age of 77; all numbers involved in a synchronicity that I explain in the Appenidix article. And this particular synchronicity continues...

My final proofreading and editing of this book was completed 10/10/13, it was sent to the printer 10/11/13, and the printer sent the first copies of the book to me on Nov. 4, 2013, exactly three years after dad crossed over. 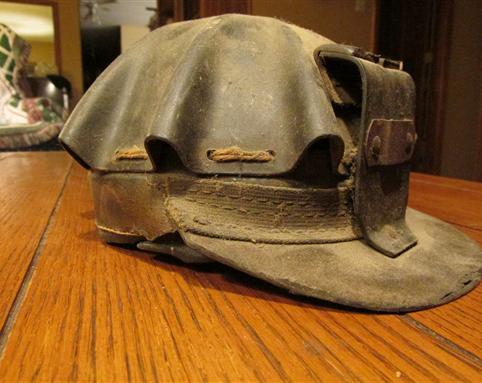 The sword is from the fraternal organization known as the Knights of Pythias, and is over 100 years old. 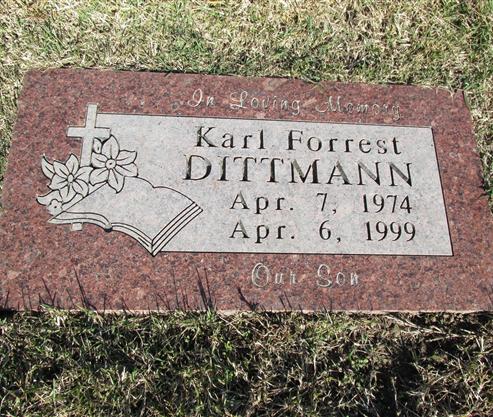 I don't mention it in the Appendix article, but this was another item that we found when my family  moved into the house where we found the two communion host makers. We live in a coal mining area, and this miners hat is around 100 years old. It fit my ten-year-old head perfectly when I found it. And in retrospect, I can see that it was telling me that I would one day find the Holy Grail by mining the "mother lode": A Course in Miracles.

Soon after asking this question, a car with the tag VMS 578 was directly in front of me. And this one wasn't difficult to decipher: "Visit Mountain Soon." So I did.

When my friend and I arrived at our Colorado destination several weeks later, landmarks had changed at a key turnoff, at the foot of the small mountain we were going to climb. I wasn't sure if we had passed the gravel road we needed, so I stopped the van along the side of the road and got out. My friend and I were talking and looking around, when I spotted a license plate in the bushes along the road. I picked it up, and was thrilled to see that it held, encoded, that day's date and more. For this was the 27th day of the 6th month of 2004 that we "Visited Mountain"!

The following images are associated with the book's appendix article entitled My Journey to the Grail.

God talks to His children ceaselessly, and Whole Spirit leads us into all truth, if we will listen.

Long ago I learned a way of picking up messages from God from license plates. If I see my birth year, number 57, on a tag, I try to decode what the letters on that tag stand for.

For example, before taking the trip to Colorado that I talk about in the Appendx article (My Journey to The Grail)  I asked God if I should go at the end of June, as planned, or if I should wait until July, as I was inclined to do.

"In an insane world, a sane man

must appear to be insane."

In the text of the book I attribute this quotation to my cousin Karl. And in the related endnote I tell how Karl once told me that, all of his life, he had been sure he would die before he turned 25! Karl told me this just three days before his 25th birthday. And he asked me to celebrate his birthday with him a bit early. But just two days later, the night before he turned 25, Karl passed away in his sleep...

There's much more to this story, such that it's one of the most memorable events in my life. So, I'll relate more of it here.

Karl stopped by my house one day, and as we talked I saw something I had never seen before in anyone; I literally saw what I perceived to be death in his eyes. Though Karl was in his usual jovial spirits, the whites of his eyes were dull and appeared almost gray. I didn't say anything about this to Karl. But just a few days later he was involved in a very strange accident in which he was literally driven over by a slow moving vehicle. And yet he sustained no serious injury.

Not long after this accident, on April the fourth, Karl showed up at my door with a birthday cake so that we could celebrate his April seventh birthday a few days early. (We lived in different towns, and he was traveling through at this time.) Karl was to turn 25, and he was especially excited about this birthday, he told me, because he had always thought that he would die before he turned 25! Karl emphasized this fact to me again and again, how he had "always been sure" that he would die before he turned 25. Karl was so happy that he had overcome that obstacle, he believed, because he had survived that accident. And he told me that he was celebrating by visiting most everyone who was close to him...

Later that day, when Karl was ready to leave, he gave me his fond farewell five or six times before we made it to the door. This continued as I walked him outside. And Karl moved as if in slow motion as he put one foot inside his car, prolonging the "good-bye" as long as possible.  Karl had never done anything like that before, and this farewell was so pronounced that, after I stepped back into my house and closed the door, I literally said to myself aloud: "Darn! That was the longest good-bye I have ever received!" Little did I know that this would be the last time I would see my cousin.

When April 7 rolled around, I had heard nothing about Karl when I made a last-minute decision. The Rolling Stones were playing in Kansas City, about 100 miles from my little town, and I decided to go. I didn't have a ticket and arrived at the concert hall late. And because a ticket scalper knew that he wasn't going to be selling any more tickets that night, he actually sold me a ticket $25. cheaper than I would have had to pay at the door! The scalpers buy seats in blocks, and one apparently unsold ticket left an open seat next to me. This was Karl's birthday. And when I later learned that he had passed the night before, it became obvious to me that this empty seat signified his presence with me at that concert.

On the long drive home after the concert the full moon and windswept clouds were doing a dance together that I enjoyed. But I was given a spectacular surprise when, just a couple of blocks before I pulled into my driveway, the moon slid behind the clouds and shown a huge, symmetrical cross on the clouds! The significance eluded me until I checked my answering machine and learned that Karl had died the night before. (I would eventually learn that the cause of death was an adverse reaction to alcohol that was caused by his anxiety medication.)

I first heard of A Course in Miracles from Karl, only a few weeks before he crossed over. And because of what he had told me about it, my memory was jarred when I saw it in a bookstore a few years later, so I immediately bought a copy. I soon discovered that The Course is much more than I had imagined. And it was A Course in Miracles that led me directly to the Philosopher's Stone, the Holy Grail, and the Meaning of Life.

As long as I had known Karl, his timing in telling me about A Course in Miracles - shortly before he left this world - is interesting. He didn't own a copy, but said that he had read the first seventy pages of a borrowed copy, and it had been "amazing." Karl also talked about the book Illusions, by Richard Bach, which he said had been very important to him. And he said that he wanted to give me his copy. However, the last time that I would ever see him, he told me that he had forgotten to bring the book...

At Karl's funeral my cousin Roseanne approached me with Karl's book. She knew that he wanted me to have it, and told me that he had forgotten it at her house. She also gave me a brightly colored computer-generated paper that said:

"What the caterpillar considers death, the Master considers a butterfly. Richard Bach, Illusions."

Roseanne told me that a friend of hers had given her the paper upon hearing of Karl's death -- and he knew nothing of Karl's interest in the book!

And so, with Karl gone, I opened his gift-copy of Illusions. And in the front pages I found that he had written a beautiful note of appreciation to me.

Those who find the Holy Grail know that there is no death, and all is part of a perfect plan. And if we open our eyes, the evidence is all around.